I wanted to put together something to show off some really good fantasy cover art and discuss what makes them so successful and easy on the eye. It’s not that I’m some sort of masochist when it comes to pointing out flaws in book covers, but I am passionate about books having good art (which leads to… anyone? Sales!)

The Unremembered by Peter Orullian is a stunning example of great cover art in action. Setting aside that gorgeous artwork for a moment, the first thing we see is the author’s name all big and bold and crimson. It’s almost a brand, which is great for a new author.

The book’s title is relatively discreet here. It’s the author’s ‘brand’ that the publisher wants us to see first.

Finally, the stand-out aspect of this cover is the artwork itself. It’s all greens and browns and golden hues and it really is beautiful. There’s a certain elegance to the man in the artwork too, which suggests a rich story.

Joe Abercrombie’s First Law series was one of the first truly ‘adult’ fantasy series I read. What initially drew me to it was the stunning cover artwork. Each book in the series features this sort of old paper/blood splatter/runic design. With each book, the intensity of the design increases, until we end up with Last Argument of Kings, with its bloody, flaming, chaotic mess of a cover (that’s a good thing).

Unfortunately here in the UK, Joe’s books have since been reissued with far less imaginative, more character-focused, covers. The originals were so good, and a stunning example of cover art doing a stellar job of selling a book.

As is usually the case, I think this is just the UK cover art. I may be wrong, though, so don’t quote me on that. In any case, this cover art is just superb. It strays away from fantasy conventions and gives us art that wouldn’t look out of place in a modern fairy tale. It makes excellent use of only three basic colours (grey/black, white and blue) and the contrast between the solitary figure in the foreground and the towering, imposing city above is well executed. It gives us a sense of what might be going on within the book and invites us to learn more about this world.

The blue element is used to indicate mist (part of the Mistborn world’s magic system) and it lends that supernatural/fantasy edge to the cover, which might have otherwise been somewhat bland without it. An excellent cover, and one of my personal favourites.

Plus, Brandon Sanderson’s name is in blue. Does that mean he is the mist?

Alright, forgive me this one trespass. This book (and its predecessor) is guilty of the Hooded Man cover art trope. However, King of Thorns shows just how this style should be used. Forget a generic hooded figure front and centre, just staring/brooding at something. This cover shows off the protagonist in all his anti-heroic glory, casually reclining atop a pile of corpses with one hand resting on a skull. It’s brutal, powerful, exciting stuff and it dares the reader to take a peek inside and see just what this guy is like.

This sort of reminds me of Brian McClellan’s also-excellent cover for Promise of Blood. It takes a similar approach, but the two end results are unique in their own ways. 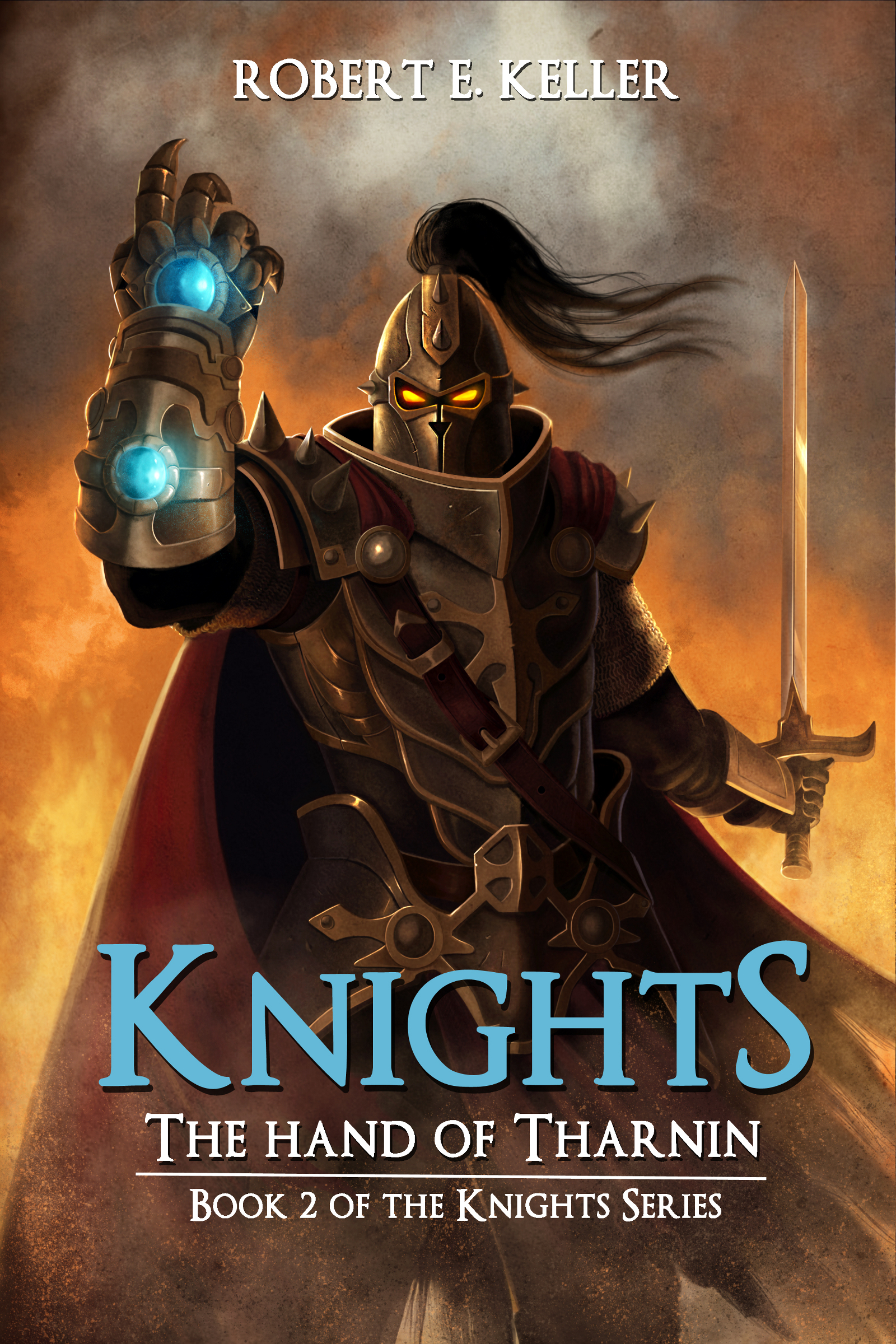 5. Knights: The Hand of Tharnin (The Knights Series)

Robert E. Keller is a self-published author with a really great series of book covers. I wanted to showcase a non-traditionally published novel on this list too, to prove that self-publishing shouldn’t automatically equal bad book covers. What Knights: The Hand of Tharnin does really well is hit us with an evocative, powerful image from the get-go. Who the hell is this terrifying guy on the cover? Is this the eponymous Tharnin? What’s that blue glowing gauntlet thing? Is he a bad guy? So many questions, and now I want to open the book to find answers!

OK, the art might be somewhat cartoony and perhaps better suited to a graphic novel, but you know what? It’s fun and it’s exciting. The colours are rich and well balanced and the book’s title is well laid out and prominent. Fans of the Knights series will have no trouble picking this book out amongst a crowd, which means they are happy instead of pissed off because they couldn’t identify all the books in the series.

Props to Mr Keller and his cover artist (unless it was him) because this is a really well-made cover and I will be checking out the first in his series in the near future.

Writing this article has actually led me down the path to the topic for tomorrow’s post. It’s Game of Thrones/Song of Ice and Fire related. It’s cover art related. It’s a rant.

All I’ll say is you’ve had fair warning…

Enjoyed this post? Why not join the discussion in the comments below? Go on, it’s sure to be epic!

So, what do you think? Cancel reply

Epic Book of the Month

Click the cover to check out our Epic Cover Art Review!